The name of my blog is a dead give- a- way that I LOVE lashes. As I’ve talked about before, dark, full lashes are one of the simplest things that you can do to give your face a little youthful polish. Your eyes are the focal point of your face- so when One Two Lash came out with these “revolutionary” magnetic lashes- I HAD to try them!!!

If you are over 40, chances are you’ve noticed some changes in your lashes. For me personally the issues I deal with are that my once long, thick lashes are skimpy, short and instead of the black color that they used to be, they are a lack luster “hen shit brown”. (If you’ve ever owned chickens this is a very apt color description.) The other problems I have are that my lids are beginning to droop, and I think this actually causes the lash line to pull forward, so the lashes actually begin to fall more straight forward than their previously lifted, soft curl. Now that you have a list of my lash problems, lets talk about how magnetic lashes dealt with these issues.

I’ve had them for about a month and last night was the first time that I had actually worn them out. Straight out of the box, they are packaged beautifully and the case that they come in is where you will also store the lashes when not in use.

Each box comes with two sets of lashes. Each eye will have 2 little lash pieces that actually sandwich your own lashes in between them, held in place by tiny magnetic strips. No glue or adhesive of any kind is used.

There are three different lash sets to choose from on their web site: Original lash, Bold lash and Accent lash. The one I purchased and am reviewing is the original lash which the site says is best for every day wear.

The One Two magnetic lash set comes with good, clear instructions as well as a site to reference for video instructions. I read through the instructions, watched the videos and went for it.

It took me about three tries to get these on properly the first time. As it turns out- it wasn’t because it was difficult, as much as it was because I was doing it wrong! The instructions tell you to place the top magnetic lash on your natural lash, then pick up the bottom lash (which is also distinguishable by a small red dot on the lash) and without blinking, place it under your natural lash so that it meets and connects with the top magnetic lash. In my opinion, proper placement of the top lash is crucial for the overall look.

The first few tries, I was holding the bottom one upside down, so when I would get close to the top lash, the magnets actually repelled each other and the top lash would shoot up near my eyebrow! Imagine my surprise! “Ummm……..What just happened here?”

Once I realized my mistake- these things were a snap to put on! The magnets attract perfectly and they just sandwich your own lashes between them.

To remove them, you just uses your thumb and index finger and slide the two magnets away from each other. Removal was really easy.

What You Should Know

These are meant to be worn with mascara. You do your entire makeup and these would be added last. The lash goes about halfway across the lash line, so they aren’t like a full strip lash. They look odd without mascara.

The magnetic lash stays in place. There was no moving around. It held up in windy conditions as well- these suckers aren’t moving until you take them off.

If you get super close, they don’t give you a flawless look. But unless you are a wiz with falsies, they usually aren’t flawless up close either. And if you’ve ever had the misfortune to have someone pick a slipped false lash off of your face and hand it to you (the HORROR!)…..well- you definitely won’t have that happen with these. 😀

They are featherweight. To me, these were much more comfortable than a strip lash. I really forgot that I even had them on.

They do require a minute to figure out the application the first few times. My advice: follow the directions and don’t overthink it, lol. They really are a simple concept and very quick to apply and remove once you get the hang of them.

I am curious to see how long these lashes last. Since there is no adhesive, I feel like with proper care, these should last a long time, which would make the $69 price tag much more reasonable. The real advantage to these though, is the quick application and ease of use.

IF you are someone who uses and loves strip lashes- you probably won’t like these. IF you are strip lash master- these won’t be worth it for you.

IF you are someone for whom the look of naturally longer lashes is something you’d like to achieve but no way are you going to mess with strip lashes- then I think you will like these.

How did they look? How did magnetic lashes help my above, old lady lash issues? To give you an idea, here is the “Before” with just mascara:

Here is the “After” with the magnetic lashes applied.

**Full disclosure- these images are filtered to minimize the lines of my old eyes and allow you to concentrate on the lashes and not run screaming from your computer.** Also this is not a brow post, so no judging please.

They definitely added volume and length to my mascara-ed eyes.

They had a lifting effect that was a surprise and didn’t need curling or anything to maintain the lifted look.

They were a nice black color that blended well over my black mascara-ed lashes and really provided a nice pop to my old, almost 48 yr old eyes.

I like them. I will probably wear these a lot. (In fact I put them on again today!) They are easy to use once you break the learning curve and I think they will last a long time. The weightless feel is great and I really like the effect for so little time investment!

What do you think? Have you tried these? Is the cost higher than what you’d shell out for lashes? Let me know in the comments what you think about these “revolutionary” magnetic lashes. 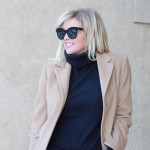